Kyos > Front page > Windows 7 and other Microsoft products at the end of support, what impact for you ?

Windows 7 and other Microsoft products at the end of support, what impact for you ?

Since its release in 2009, the Windows 7 operating system has been gradually adopted by most companies. Since Windows 8 did not meet with unanimous success, it will experience its first loss of speed only in 2015, the year Windows 10 entered the market, remaining today the last client operating system marketed by Microsoft.

Today, Windows 7 maintain a significant market share of about 35%, compared to Windows 10, which now equips more than half of the world’s computers. 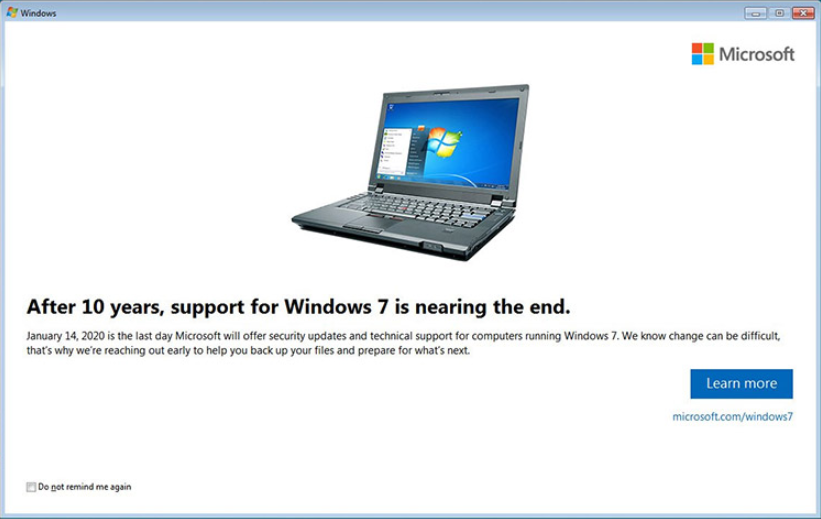 What are the main Microsoft products at the end of their life ?

Like many IT products, Microsoft announces the lifespan of their operating systems as soon as they are released. It also communicates on the duration of the associated support, which includes, among other things, the publication of software updates.

The end of Windows 7’s life will take place on January 14, 2020, from that date Microsoft will stop distributing updates to fix bugs and security issues. As a result, customers are exposed to increased security threats inherent in vulnerabilities in this product that may be discovered after this deadline.

Among the most frequently encountered in companies, the following products will expire on January 14, 2020 :

What impact for you ?

More than three years ago, Kyos initiated a gradual migration of the computer and server equipment under its management. We now count more than 650 Windows 10 workstations and nearly 300 servers in a version later than Windows Server 2008 R2 among our customers under management.

Experience gained during this migration work has shown that most third-party vendors have adapted their software solutions for optimized performance on the latest Microsoft systems. However, there are still some special cases where an operating system migration remains difficult.

Our teams of systems experts and security consultants can guide you through a suitable migration path or advise you on the measures to apply if your situation does not allow to upgrade to the latest Microsoft systems at this time.

Do you have a Kyos Assist or Kyos Serenity contract? Migration works have been carried out, planned, or are being discussed with the aim compete this change before the Microsoft deadline.

Your technical and commercial representatives are at your disposal for any questions you may have about the status of your IT assets under management and the products that will soon be at risk.